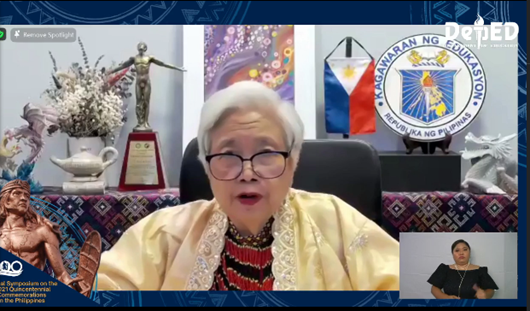 The Department of Education has organized the Virtual Symposium on the 2021 Quincentennial Commemorations in the Philippines, in partnership with DepEd Region VII – Central Visayas and the Division of Lapu-Lapu City on May 7, 2021, via Zoom Teleconference and broadcasted live through the DepEd Philippines’ Facebook page.

One of the highlights of the virtual symposium was the motivational address by the Department of Education Secretary Leonor Magtolis Briones. Secretary Briones expressed her gratitude to the City of Lapu-Lapu for holding the said event and her DepEd family for supporting the event. She also provided insights on the real meaning of Bagani and how beautiful this word is. She also discussed the implications of this symposium wherein she presented the DepEd mandate as enshrined in the 1987 Constitution.

In the first discussion entitled “Tagumpay at Pakikipagkapwa-Tao: 500 Taon ng Kagitingan at Tagumpay ng Pilipino”, De La Salle University History Professor Michael Charleston “Xiao” Chua shared his insights and lecture on the controversial Quincentennial Commemoration in the Philippines. Professor Chua also explained that there are different perspectives in the Quincentennial Commemoration: the 500th Anniversary of the Victory at Mactan, the 500th Anniversary of the Arrival of Christianity in the Philippines, and the 500th Anniversary of the First Circumnavigation of the World. In the second part of his lecture, he discussed Victory and Humanity as the theme of his discussion, wherein he highlighted Ferdinand Magellan’s circumnavigation.

DepEd Undersecretary for Legislative Affairs, External Partnerships and Project Management Service Tonisito M.C. Umali served as the second lecturer in the virtual symposium. Usec. Toni Umali presented facts and insights on the 500th Commemoration of the Victory of Lapulapu in the Battle of Mactan. He also further explained the Republic Act No. 10086 or the Strengthening People’s Nationalism through Philippine History Act.” Usec. Umali has reiterated the significance of studying the Philippine History and shared several Republic Acts relating to it.

An open forum hosted by Ms. Marigold J. Cardente and Mr. Quirico Sumampong was held after the presentation. Secretary Briones joined the discussion together with Professor Xiao Chua and Usec. Tonisito Umali. One of the issues addressed by Professor Chua was the different sides of Lapulapu’s story. He clarified that historians rely on documents but unfortunately, the only people who made documents about Lapulapu were Europeans. Professor Chua also urged everyone to verify whether the sources on the internet are credible and have citations.

Another issue raised was Lapulapu and the Cebuanos being Muslim as stated by one of the government officials during his speech. Professor Chua promptly addressed the issue, saying that he does not want to criticize the official as the latter is not a historian. He provided possibilities that maybe his staff was the one who made a research on Lapulapu’s religion. Professor Chua emphasized that according to his research, Humabon and Cebuanos eat pork while Muslims do not eat pork. Another evidence he presented include tattoos on the warriors’ body which is prohibited in Islam.

The virtual symposium ended with an inspirational message from Secretary Briones. She urged DepEd officials who have official business in Cebu to show courtesy to Lapulapu Shrine. Director III of the External Partnerships Service Dr. Edel B. Carag delivered her closing remarks wherein she expressed her gratitude to everyone who participated in the DepEd-organized virtual symposium. 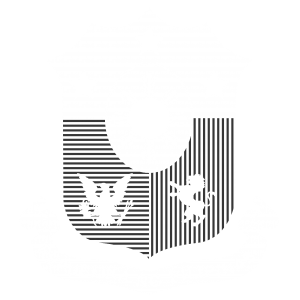